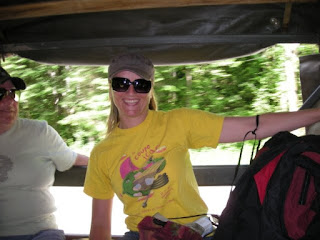 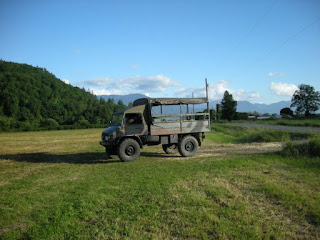 Yes, you are looking at the new local champion. No, not me - the Unimog! Jim (the local instructor) had enough of beating up his trucks & vans on the 4 wheel drive road up to launch and decided to go all-out-extreme. Oh yeah baby!

It was a windy day of flying, gusts blowing through launch & people looking pretty close to parked in the air. I got out to the hill late (5-ish) & it hadn't calmed down by then. I waited an hour to launch, a little timid as there were still some good gusts blowing through but I finally pulled up my britches & just hucked off. The rest of Jim's crew was heading over the back to a calmer landing zone about 3 kms away, so I flew over with them. Still breezy over there, maybe 9 km/hr ground speed into the wind which of course made for super soft touchdowns.

The coolest part of the whole flight though had to be watching the Unimog in all it's camouflage glory barrelling down the highway on the way to retrieve us. The "air conditioning" is nice too, since you're in pretty close quarters back there. Maybe next time he'll take us through the drive-thru...

Posted by Martina at 8:42 PM No comments: 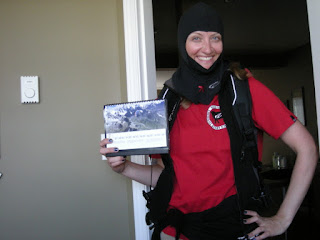 My Ozone swag came in yesterday! Check it out: a tshirt, long sleeve t, vest, ninja cap (aka balaclava), calendar and kick-ass backpack. Perfect timing too, as I had a disappointing weekend of flying and needed the boost. Now that I can dress like a sponsored/comp pilot maybe I'll fly like one. Ha!

So this last weekend my flying was as ridiculous as I look in this picture. Seriously. I went to the Lumby Air Races, all excited to be signed up for my first comp and put my "improved" skills to use. I had 3 flights over the weekend, and the only good thing I can say about any of them is that I had beautiful launches & landed on my feet. Any time my feet left the ground my brain completely shut off and I flailed my way to the dirt.

Ok, I did have a couple nice low saves, but considering none of my flights were longer than 20 minutes they may not count as actual saves. Just a "there-I-was-100-metres-off-the-deck-and-I-climbed-back-up-200-metres-before-sinking-out-again" kind of story. Sigh.

But then...redemption came in the form of free stuff. I put all my new Ozone stuff on & ran around the house for luck and it paid off! Went for a flight at the local hill and didn't suck or sink out or anything. I was wind dummy & went straight up, flew around for an hour, and only came down to land when the boys did because the winds were forecasted to pick up & the thermals were starting to get blown apart & rough. Yay me!
Posted by Martina at 4:32 PM No comments:

I hit my 600th flight yesterday. I'm kind of a geek and record every one of my flights, even the 7 minute sled rides. So I went up to launch yesterday excited to celebrate #600, but didn't want to jinx myself so didn't tell anyone. The jinx monster found it's way to me anyway, and it was more like my 6th flight than 600th!

First of all I blew 2 launches. That was weird - I may not stay up the longest or get the highest, but launching is where I usually shine. On my second attempt the wing fell around me & I ended up stepping through my lines & had to unclip my risers to unwrap myself. It was completely embarrassing, and 2 of my friends ran over laughing & sorted me out as I was obviously a total moron by this point and couldn't do it myself. I got it right on "take 3" & flew away, only to see that my speed bar line was wrapped around my riser. Sigh. So I spent some time fiddling with that & flew off towards the LZ. At least it was just a morning sled ride & it wasn't like I was missing out on thermals.

Except the student in front of me was going up! I rushed over there only to hit sink, as the student merrily bobbed his way over to the landing. By now I was pretty mad but had to focus on landing, as the student was all over the place setting up his approach. I went to a different end of the field, towards the live webcam Jim has set up so people stuck at home can watch us all fly. At least I'd have a good landing & maybe that would be all anyone would see. HA! A gust blew through & I got shoved around on final & dumped unceremoniously on my butt.

The only thing that kept me from crying & screaming & throwing things when I got up & shuffled off must have been character - you know, that stuff you're supposed to be "building" when you're doing things you don't like? Maybe Mom was right.

But this story does have a happy ending. Flight 601 saved my pride. I launched (perfectly on the first try, thank you very much), climbed out right away & landed on my feet after an hour. #602 at Bridal later was a mellow, boaty, take-a-tour-around-the-valley kind of flight. So maybe #600 was just a reminder from my wing to say, "Hey you! Don't get too cocky just because of a statistic. Remember who's in charge here." Thanks Ms. Rush, I'm listening.
Posted by Martina at 8:31 AM No comments: