Hard to believe the first month of the year is gone already!

January was actually an awesome month (besides my whiniest birthday ever - sorry if you actually read that post before it got put in the trash where it belonged...) and checking in on my resolutions I've gotten a good start on them. I flew some small xc's in Mexico, came up with my company name & have been building a website over the last week.

So maybe I'm just looking for an excuse to drink the mini bottles of champagne left over from New Year's Eve but I was thinking of having a new New Year on the last day of every month. A time to re-focus on goals and reflect on what was accomplished over the last 4 weeks. A method of keeping myself accountable and full of sparkly wine...I think I may just do it!

My paragliding goals may have to wait until spring to get going again. As you can see from my in-flight photo from last week it's not quite as warm or thermally as Mexico, but I have a pretty cool view just the same. 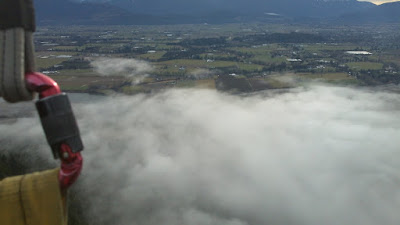 Happy New Month's Eve everybody!
Posted by Martina at 8:18 AM No comments: 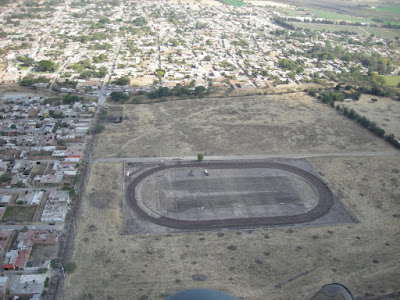 The day before yesterday the weather looked amazing. Big puffy clouds were forming so we figured a long task was called for, but after launching & getting high right away the clouds shaded out the valley & we sunk down to the landing zone. So we decided to head for the hotel again & try to land in town at the soccer field. My great luck this week continued and I got nice & high and was pretty sure I'd make it. Just before town the shade moved in again, but I saw a couple of vultures milking a small thermal & flew over to join them. My plan worked & I got enough lift to easily glide to the soccer field (above). Even more exciting than making it to the "goal field" (and making it first!) was the kids that ran out to the field to see us: 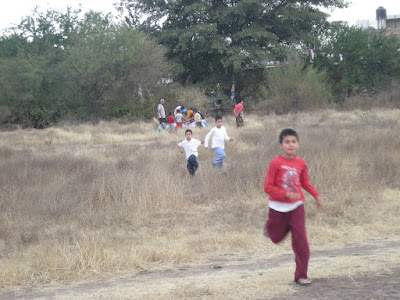 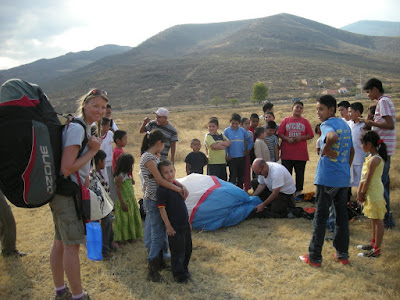 By the time the 3rd pilot landed, most of the neighbourhood kids had shown up.

Yesterday morning the clouds looked even bigger so we planned to fly north where the guys did their big 30 km XC at the beginning of the week. First flights we got shaded out again but we went back to launch to try again. I decided to fly last as I've been rushing off launch first most days, but that may have been the start of my downfall. The first 2 pilots were starting to climb out and I flew towards Derek who was working a thermal out front. I joined him in it and somehow - despite being the star thermaller this trip -I fell out of the thermal & couldn't get back in! There was shade all around & I had to do the glide of shame to the regular LZ. Derek ended up going about 10 km, the next furthest pilot about 12 and the "winner" of the day got 25km.

Needless to say I was upset for choking on the best day, but after a Corona & some lunch we went back to the other launch for a glass-off flight. That's when all the hot air in the valley releases at the end of the day and the air is smooth & lifty & you just fly around til sunset. Always a good cure for what ails ya... 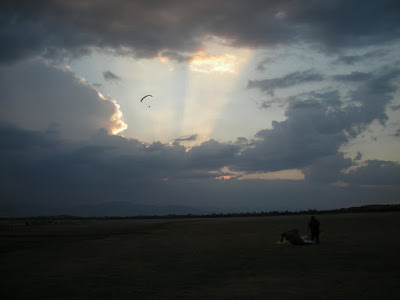 Posted by Martina at 5:35 AM No comments: 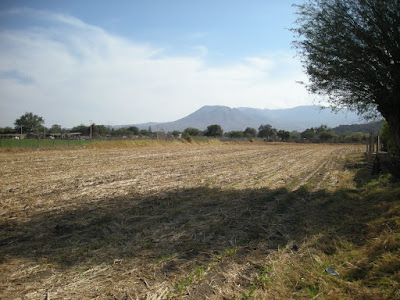 
Calendar days are starting to become meaningless ....I'm deep in vacation mode now. I'm pretty sure I still have a week left before it's time to go home so that's 7 more days of epic flying.

So a couple of days ago I missed a day due to an upset Mexican stomach. Yesterday I woke up feeling great and the day looked epic, but 30 minutes into my flight I started feeling nauseas & had to fly out. Too bad since I was high & on my way to a great XC (cross country flight). I ended up getting 10 km or so, but the guys who flew where I was heading got 30 km. There may have been some jealousy on my part but I knew I could've done it had I been well so that made up for it.

This morning I felt fantastic - I didn't realize how well until one of the guys from Colorado noted that my stomach must feel better since I was doing handstands on launch! The weather was a bit more stable so we wouldn't be getting too high, but I managed a few low saves and got to try some flat land flying which is new for me. Herminio swooped into the LZ and as we gave him a ride up he said the weather for this week is just supposed to improve. Awesome!

Flight #2 we planned to fly to our hotel about 10 km away. Not a super long flight, but in Mexico they like to plant power lines in the most unlikely places which really limits your landing options. Add a bunch of fields in crop & it makes the flight much more interesting. Since we were ready for a great flight of course we hit sink all the way to the regular landing zone. Well...ALMOST all the way. At 200 meters over the ground I saw a tractor working & made a last-ditch effort to fly over & hope he was kicking off a thermal. There was a tiny beep, but a beep just the same. I worked that little patch of lift to over 1000 meters higher! Nothing feels as good as a low save, I swear. Derek & a few others saw me zoom up & hurried over and soon we all flew towards the hotel.

I landed in a cut corn field 1km out of town with a shady place to pack up that was next to a road. A farmer soon came over & started talking. Between my butchered Spanish & his broken English we talked about flying, his stint living in Oregon & the restaurant his sister-in-law owned in SLC Utah. He soon offered me a ride and as he went to get his truck Derek came walking around the corner! I knew he had landed somewhere nearby but thought he was a lot farther away. Antonio (the farmer) gave us a ride right to our hotel door - talk about spoiled! A chicken fajita (with grilled pineapple in it) with some tequila rounded out another bueno day. 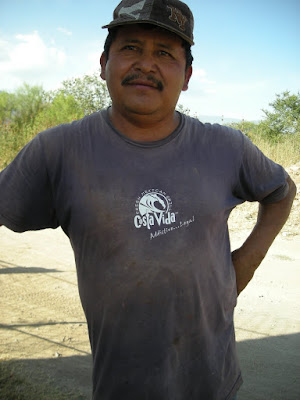 Antonio (my saviour driver) wearing the t-shirt from his family's restaurant in Utah.
Posted by Martina at 4:10 PM 1 comment:

Being sick on vacation sucks!

On the good side, I think I just accidentally inhaled some water while showering or ate something nasty so should be good by tomorrow. The rest of the gang had a couple of flights but I don't think I missed out on anything epic (yay).

I also made a new friend while sitting on launch watching everyone else fly away. So all in all, it's still better to be sick in Mexico than in the rain/snow/wind at home! 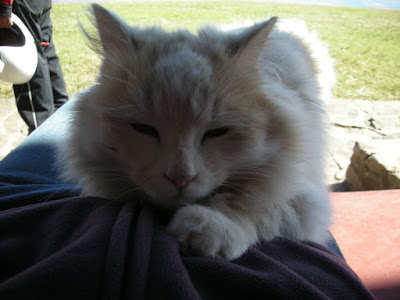 Posted by Martina at 8:23 PM No comments: 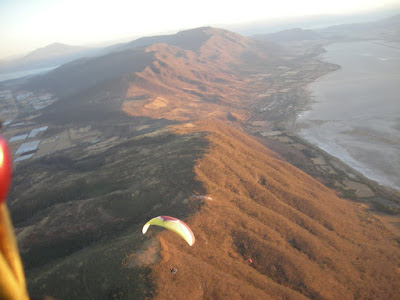 View from my glider

Day 2 ended up being a rest day for Derek & I as it was too windy for our taste. Jim had a flight though & showed us where to fly over the back if it ever gets too windy when we're in the air already. We picked up another flying couple from the airport & had dinner at a fancy restaurant, eating food like artichokes with roquefort and a portobello mushroom dish. A nice change for a night, but we're back to quesadillas and coronas now.

Sunday was epic! We flew San Marcos again for a couple of hours, launching a little after noon. It was a mix of butt-kickin' thermals, ridge lift and a few friendly thermals too. We all went to land about the same time, tired & ready for lunch. We drove into a nearby town & stopped at the roadside restaurant that had the loudest band. Perfect choice! We ran into Manuel, a local hang glider pilot, and ate a huge lunch with him. Conversation happened in bursts between the band's songs but we had a great time trying.

We decided to head back up to launch in hopes of catching a smooth glass-off flight, and arrived to watch Herminio swooping launch repetitively in fat, laminar air. Game on! We got about an hour of soaring in until sunset - Jim waited in the landing zone with his headlights on since it was getting fairly dark as the last of us touched back down to earth.

Back at the hotel, the festival of Guadalupe was STILL going on, so we walked to the square to watch some more madness. All that flying today took it's toll though so I was in bed by 10...it's a hard life!
Posted by Martina at 6:11 AM No comments: 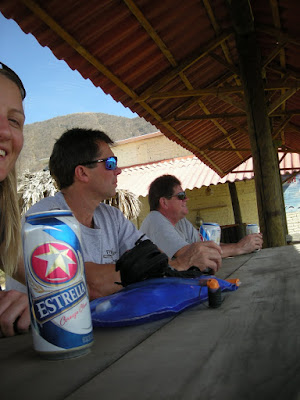 Happy at the landing field

Was I really sitting in the rain just 3 days ago? It's hard to believe that it's winter at home when I've spent the last two days running around in shorts & flip flops and though I hate to admit it, I've even spent a few moments trying to find some shade!

Our first day here was a whole vacation in itself. Jim (our friend from home & tour guide for this trip) took us for breakfast at an amazing restaurant. Sitting on a hilltop overlooking a lake, the building was made of stone which kept it cool naturally, and no expense was spared on the decor. Intricate carvings on the wall, art inlaid in the floor, and the bathrooms were one of the most beautiful I'd ever seen.

After snooping the grounds around the restaurant (check out the picture below...there's a hot tub inside of that head!) we took a drive up to look at the launch in San Marcos. The winds were blowing in perfectly, so I told the butterflies in my stomach to take a hike and ran off the mountain to spend an hour exploring the cactus-covered ridge with only Derek & the vultures sharing the air with me. Landing was at a giant field owned by a local hang glider pilot, complete with a shaded bench area where Jim met us with cold beers after we folded up our wings. 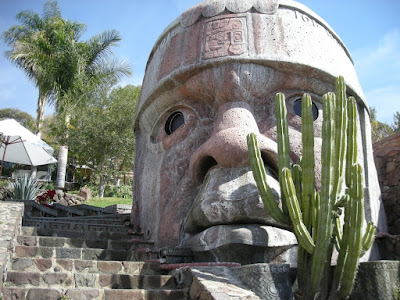 Enter the hot tub through the door in the back of the head...really!


The rest of the day was filled with siestas & fiestas. The town we're staying in was celebrating the festival of Our Lady of Guadalupe. This started with a parade and led to an endless play which I thought was the story of Guadalupe but had an awful lot of seemingly unrelated dancing in it. Competing for attention across the town square were traditional dancers dressed in feathered headgear and also fireworks going off every few seconds. Mayhem! After a few poor-man's margaritas (a shot of tequila poured into a Fresca) we were done but unfortunately sleep was hard to come by with fireworks going until midnight & starting up again at 6 am. Such is life in Mexico!
Posted by Martina at 7:49 AM No comments: