A female pilot friend I met in Oregon this year came & stayed with me for a couple of days. She lives overseas & had come to the US & Canada for a few months to do the comp circuit, a great way to travel somewhere new & have instant friends wherever you go. We got to talking about competitions & female pilots and our conversation went a little like this:

Her: "What is it with Canadian girls? You're all so tough...it must be something in the water!"
Me: "What do you mean?"
Her: "Well Canadian Girl #1 is just so brave. She was at all the US comps...she'll fly anywhere in any conditions & think nothing of it."
Me: "Yeah...she's really focused on being the best"
Her: "Then when I went to the Canadian Nationals I met Canadian Girl #2...that girl has no fear either! She'd launch when others were nervous & she flew over 100 km! Then at the Landing Zone I bumped into Canadian Girl #3. She said she'd just got released from the hospital where she had blood in her urine from her crash the day before and was told to take it easy, but she was preparing to go fly again anyway!"
Me: "Hmmm."

See...I'm a Canadian girl, but sheesh, I've been so ridiculously cautious in the air compared to my flying sisters that I was pretty embarrassed at this point in the conversation. We made a joke about trying to find this magic "Tough-Canadian-Girl water" and promptly made a deal with myself to "grow a pair".

When I first heard of and starting meeting talented female paraglider pilots they all seemed so in-your-face intense, and that's just not my style. I wondered if it was possible to be a girly-girl and still be a kick-ass pilot. It seemed all the top male pilots were laid-back, surfer-style guys and it was rare to meet any women like that. But as time went on and I traveled the world & met more cool women it was clear that yes, you could be yourself & be a great pilot. Being focused & driven is definitely a big part of the equation of all top pilots, but I think more women are realizing they don't have to *act* like tough guys to *beat* the tough guys. Case in point was my visiting friend, who speaks in a soft voice yet regularly flies huge distances and ends up on the podium at flying events.

So yesterday I found myself going up to launch from a fairly new advanced-rated site. I'd tried to fly cross-country from there before but had lost confidence in the air & ended up defeated at the closest landing zone. I was determined to fly tough and set a goal of flying 15 km back to the parking area. I knew if I made it there that day it would be the boost of Canadian-Tough-
Girl that I needed to help me become that kick-ass pilot I want to be. 2 guys launched ahead of me and 2 behind me. A few times I came close to giving up as I got low (cloudbase wasn't super high) but hung in there, determined to make the farthest landing field and not be the only one who sunk out...and definitely not be the GIRL that sunk out.

I ended up being in 2nd place almost the whole way out, taking the risks out front of 3 of the other guys! I made my goal, and maybe, just maybe, unlocked that pretty pink door in my soul where Tough Canadian Girl was hiding. 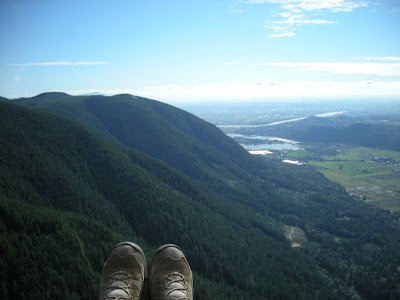 Halfway through my 15 km flight. The landing area is just around the corner at the end of the mountain range.
Posted by Martina at 10:29 AM 1 comment: