People warned me about this. When I started flying tandems, pilots started telling stories about "someone" they knew who ended up never flying solo any more, or getting sick of flying, or...or....or a bunch of other worst-case scenarios because they were jealous that I was going to get paid to go play in the sky (at least that's my theory, ha ha).

My case of tandem-itis isn't too bad and is easily curable. It has to do with switching gears...let me explain for the non-pilots.

Paragliding wings are rated from beginner (big, fat stable wings that rarely collapse and practically fly themselves) to competition (skinny twitchy wings that have great performance but need constant attention in the air). Wings are now rated from A (beginner) through D (performance). Most tandem gliders, including mine, are rated "B", which means it's pretty stable but has good performance. My solo wing is a "C", which although is only one level higher is a noticeable difference. Also, the heavier you are on your wing the less it moves around, so on a tandem you tend to cut through most of the bumps in the air.

What this all means is that I'm so used to flying around on my stable tandem wing, heavily loaded and really only spending 10-30 minutes in the air, that yesterday when I went flying in slightly turbulent conditions on my lightly loaded intermediate wing...I got spooked. Not a lot, but more than I needed to be. Every little twitch & rustle concerned me and I couldn't figure out why. With over 100 flights this year you'd think I could just cruise through any conditions the weather gods threw at me, yet here I was whimpering at the smallest bumps.

After an hour of airtime I landed and contemplated on what just happened. My conclusion is that since I try to adapt to change fairly quickly I also tend to move on or 'forget' my actions in the past. For instance, after a day or 2 at the competition in Oregon, I got into cross-country flying mode & was staying up in rougher conditions than I would normally. When I came back & started flying tandems, I switched it off & went back into boating around looking for smooth air to keep my passengers from puking. But when trying to fly back in thermic conditions yesterday I was stuck in a tandem headspace and had lost that confidence so recently gained from flying in rougher air.

Knowledge is the first step I suppose. My goal is to be a well-rounded pilot, which means being able to glide effortlessly between tandems, solo, acro, cross-country...whatever the case may be. My transitions definitely need work, but at least now I know what I need to focus on. Today looks like a good opportunity - my friend may have a tandem for me and then after I can free-fly and as the wind is forecast to pick up later there may be a chance to practice some acro. Nothing like trying to fix everything at once!
Posted by Martina at 9:26 PM 1 comment: 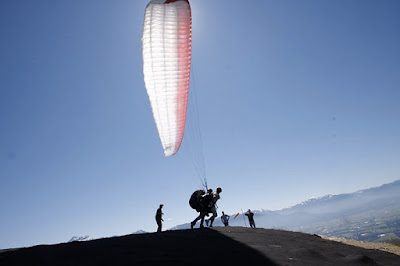 Looking out the window at the rainy sky it's hard to believe that just last Saturday we flew 20 tandems in one day. We're supposed to fly 5 more today so I'm sitting here willing cloud base to rise higher than the mountain so we can have some fun in the sky and introduce more people to this amazing sport.

One of the most common questions people ask about tandems is about the take-off. "Don't your legs get all tangled up when you run off the mountain together?" Luckily for me, a new paragliding student has a partner who is an amazing photographer and she came along one day to snap some pics. The one at the top of this post is just fantastic and does a better job showing how it works than I can attempt to explain with all my hand gestures and lots jumping around. As you can see the passenger is in front, and as they start running the wing comes overhead and we run off in perfect harmony...ideally. The 'tangled legs' come in to play if the passenger stops running before we've left the ground, or even worse if they sit down (yes, it happens!). But as you can see from the photo, the take-off run is smooth and tangle-free...a perfect beginning to an amazing experience.

Life is pulling me in many directions right now, but the one constant in my life is flying. Paragliding offers so much - quiet meditation when you're alone on a smooth flight, sharing and teaching when taking someone with you, or a good mental workout when you're trying to figure out where all the lift is that day and trying to optimize your air time. You get the benefit of hanging out with friends before and after the flight, yet get alone time while soaring through the sky. As my own world is changing all around me, I'm grateful for the amazing gift of flight I've been offered and what it brings to me. I hope you all have something that creates the same kind of joy in your life.
Posted by Martina at 9:48 PM No comments: