After going away to visit family and missing 2 weeks of amazing flying back home, I finally got some amazing air time yesterday. My first flight was a tandem with a pilot friend who'd never been on a tandem before, and we had the perfect flight. Takeoff was flawless, we caught a thermal that took us above launch when other people were sinking out, and ended with a one-step landing. Couldn't have asked for better. But the day kept improving!

I went back up to launch & some people were choosing to drive down instead of fly because the air looked punchy. For the first time in a long time I was actually nervous, maybe because I hadn't flown solo in almost a month! 3 of us decided we'd try to fly a small cross-country (XC) flight over the back together, so I took a deep breath & launched. As soon as my feet left the ground I was so excited to be in the air, caught a great thermal and rode it up to almost twice the height of launch & took off on my XC. The plan was to follow one of the pilots who'd done this route before, but I have a little problem with something called patience. So I pushed on ahead, leading the others along the mountain ridge. 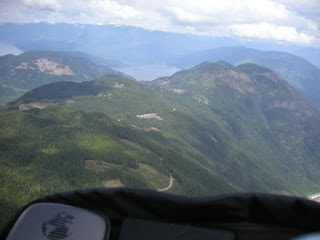 My view heading over the back.


I tried to cross to a small hill that usually gives off thermals & lets you fly further (like across the valley) but as you can see from the next picture the sun was only on the far side, and I hit too much sink in the shade. I landed in one of the big light fields beside the intersection on the left side of the photo, quite pleased with myself. Luckily one of the other pilots came & picked us up, 3 of us ended up landing here. 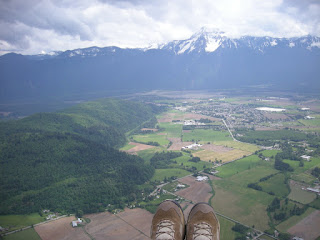 We picked up another pilot who landed out & headed back up the mountain. I was pretty tired by now, feeling the crash after the adrenaline rush of a great tandem & fun XC. But Rob said he'd go tandem with me, and conditions looked mellow, so I figured a quick sled ride would be fine & get me one flight closer to being signed off. We set up our tandem, reviewed the launch procedure & I inflated my wing. Now my only instruction really was telling him to WAIT until I said run. But the problem with taking another pilot on a tandem is that sometimes they get their own ideas ;) So the wing came up crooked & I was just about to kill it when Rob started barrelling off launch! I think I squealed but all I could do was try and fly the wing as he charged off the hill. We made it (not at all gracefully) by the sheer force of will. A good lesson though, because you never know if your passenger will listen to you. So I need to make sure my instructions are very clear, that I abort the takeoff immediately if I don't like it, and stay calm & fly the wing no matter what, which thankfully I know I can already do. Our flight was fantastic though, we thermalled up over launch after everyone else had sunk out, and we had another perfect landing.
Posted by Martina at 9:10 AM 1 comment:

I'm Flying Away again. This time it has nothing to do with paragliding (shocking, I know!) so the only flying I'll be doing is on an airplane. It's a visit-the-family kind of trip, so no paragliding whatsoever for 2 whole weeks. I don't know how I'm going to survive, ha ha.

The tandem training is going well, I have 11 of the 20 flights I need to get rated, plus I had my instructor/tandem ground school last weekend. I have some good articles to read while away, and there's always Youtube to keep you updated on the latest flying techniques. Well, realistically most posted videos tend to be what NOT to do but they're always amusing.

I've also taken over as membership director for our local soaring club so there are sure to be some flying-related emails coming my way while I'm gone. It'll almost be like I never even left!

See you again in a few weeks, hopefully my next post will be that I've finished my tandem rating and have been doing some wicked X-C spring flying!
Posted by Martina at 2:35 PM No comments: