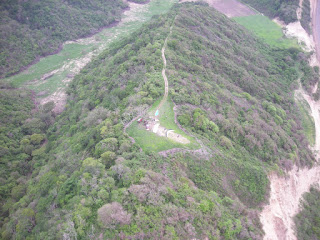 Ah...Ecuador. I got my fix of heat, ridge soaring, mountain (Andes) flying and as much, or I should say as many varieties of corn that I could eat. I counted 4 types on one of my lunch plates: corn on the cob, popcorn, something they translate as hominy (puffy white boiled kernels) and a type of corn that was like the unpopped kernels at the bottom of your popcorn bowl but bigger and softer. But enough about corn...
The picture is from my first flight in Ecuador. It was a 3 hour soaring fest in Canoa, wearing shorts (which I paid for later with a nasty sunburn) where I only landed due to all the water I drank earlier. I still haven't gotten up the guts (if that's the right word) to wear the diaper Veronica convinced me to try, but I'm wishing now I would have. Anyway, it was an amazing flight & started the trip off beautifully. 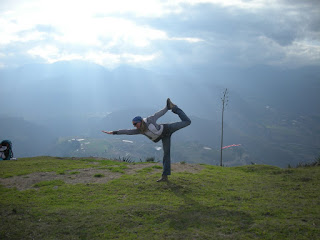 I also kept up with my yoga (ok, maybe I just posed for the camera). 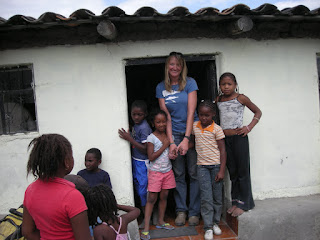 The paragliding on this trip was great, but everything else surrounding the flying was also amazing. We flew in the Chota valley (close to the Columbian border) and landed in this town that's inhabited by Afro-Ecuadorians. The whole town came out to watch us land, and these little girls would NOT let go of me. It was an overwhelming experience - we landed in a field that had been planted recently and when the kids ran over them to greet us the farmer came out swinging a machete! I froze & looked at my guides, but they weren't running so I just edged closer to them. We ended up going to Mr. Machete's modest 'house' for negotiations and the more of his homemade sugar cane liquor we drank the cheaper the price of the damaged crops got. When we had to leave & I finally peeled all my new best friends off of me and jumped in the truck, one of the local men pulled Julian (one of our guides) aside and asked if I was available! The actual word he used was "compromised", which loosely translates to engaged. That's the fastest I ever got a marriage proposal! Ha!
I had a couple of personal bests on this trip, but the coolest thing for me was that I finally got to be one of the "experienced" pilots. For years I'd be sitting on the hill, waiting for the Big Dogs to launch & let the rest of us know if the conditions were too strong. On this trip I was one of the 3 that our tour guide would send out first. As I've progressed over the years I haven't really paid attention to the moments where my skills increased but this was a nice marker for me, and a big compliment.
I'm in the process of writing my whole trip out and may update this post in the future. I'm happy my first flight of the year was in South America and 3 hours long - it's a great start to a great year!
Posted by Martina at 8:16 PM 3 comments: