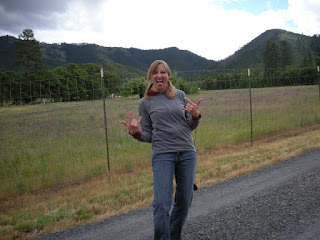 Drove down to Oregon for the Starthistle Fly-In, hoping for some sunnier weather & fun times. The sun didn't really come out, but it was flyable every day and definitely a good time.

The locals put together a fantastic event. Hayden (the launch monitor) would constantly give us weather updates while we were flying, and we were told the winds could pick up without much warning. Sure enough that happened one day & we were advised to bypass the usual LZ & head to one further west. Only problem was that it was upwind, so with full speed-bar I still wasn't going to make it. Hayden was advising all out-landers to try & pick a long field in case we couldn't penetrate or just got dragged back on landing, so I chose this nifty spot in the photo. What you can't see is the big stand of turbulence-producing trees behind the camera, which meant I had to hold on tight & get rotored all the way down. Luckily I had a smooth touchdown at the end & a local was standing at the gate to let me out. Turns out it was just a field of weeds, so no apologies were necessary for landing in crops. Derek & Pat followed me in as they weren't going to make it to the other LZ before the rain started either, so I gave Derek my camera and took the opportunity to pose for my extreme X-C photo. Wohoo! 2.8 km's! Not quite enough to win the Fly-In...

There were other contests to try for though. I took 3rd place in the beanbag drop, and also cleaned up during the raffle, walking away with lots of good swag (including a PTT headset & Segway rental). Meeting up with old friends & making new ones was, of course, the best part of the trip, and I can't wait to see them all again soon.
Posted by Martina at 8:47 AM No comments:

I figured it was time to blog again to give my non-flying friends somewhere to avoid when they're sick of hearing me talk about paragliding!

Paragliding has crossed the line from something that I loved to an all-out obsession. Funny enough this change occured during the past month in the midst of the torrential downpours we've been having. After the 4th day in a row of rain waking me up...in MAY...I was overwhelmed by despair. I literally pulled the covers over my head & contemplated never leaving my bed again. That's when it hit me - I was addicted. My moods have now become completely intertwined with the weather. Is it flyable? I'm happy. No chance of flying? Don't come near me.

I forced myself out of bed & tried to focus on something else. Over to facebook where a flying friend from Europe said he just voted for me in a paragliding contest that I'd forgotten I'd entered and had actually had my entry nominated:

That's when I resigned to my addiction. I mean, when paragliding hunts you down at home and emails you that it's sending you prizes there's really no way out, right?

I felt a lot better when I accepted my fate. Since then I've happily flown sledders in the drizzle, blissfully scratched in light lift all the way to alternate landing zones and launched even when reports from the air said conditions were 'spicy' and 'interesting' (macho talk for 'Mommeee!'). My skills have really progressed over the past year or 2 and now I'm finally admitting that I'm a pretty good pilot. And isn't admitting something the first step in recovery? If you want to recover, that is...
Posted by Martina at 1:14 PM No comments: