International Women's Day is celebrated worldwide on March 8.  That is also the anniversary of the first woman pilot license, which was the inspiration for Women of Aviation Worldwide week.

Paragliding (and hang gliding too) is a sport that attracts a lot more men than women, especially here in North America.  Reasons for this are debated over beer at the end of epic flying days, but one possible explanation that never seems to be brought up is lack of role models.

A lot of women start lessons because their boyfriends fly, and because it's not their own passion most of them drop out.  But would more of them stay in the sport if there were a greater number of women pilots overall?

I for one had never thought about instructing and flying tandems until I met a young female pilot who was training for her license.  Up until then almost every tandem pilot I met was a male in his late 40's or 50's, so not only a different gender but also not in my age group.  So seeing Veronica doing her tandem training totally changed my perspective and within a year of meeting her I got my own tandem rating and haven't looked back since.

So to "Fly it Forward" I'm doing my part to celebrate Women of Aviation week by (1) giving away a free instructional tandem to a female through my Facebook page and (2) joining in the festivities at the Langley Regional Airport on the weekend of March 8-9.  I have donated a tandem flight to their raffle as well, and will be set up at the airport with some gear to show the participants.  I'm thrilled to be a part of this effort to encourage women to consider careers in all types of aviation and hope to inspire some girls to take to the skies and discover how amazing flying can be! 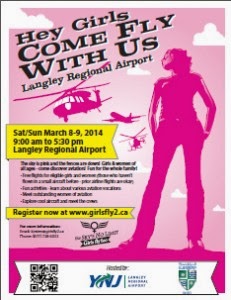