4 months ago I did my first tandem flight as the pilot-in-command. Yesterday I flew my 50th passenger! It's been a blast so far & I'm so glad to have been able to pursue this facet of my favourite sport. Tandem flying has made me see things differently, given me more confidence in my flying, and brought me endless joy in living vicariously through everyone of one my passengers thrill of discovery on their first flight.

I had originally hesitated each time someone asked if I was going to get my tandem rating. I figured that turning my passion into my job would make it feel like "work" and kill my love for the sport. I thought that tandem flying would "cut into" my solo time and I'd start resenting it.

Of course now I've found that the opposite is true. Nothing beats a phone call or email from someone offering me money to fly! In fact, as the days get shorter & fall is approaching I'm sad to think tandem season is almost over.

My dream is to get enough experience so that I can work around the world flying tandems one day. Head to South America or New Zealand in the winter & fly tandems in their summer and basically get a paid vacation. 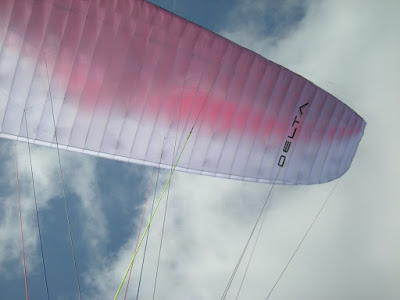 My new Delta taking me to cloudbase

Finally had a chance to soar my new paraglider - the Ozone Delta. I love it! Here's why:

Launching: Super sweet. In light winds or strong it inflates smoothly, then a quick tap of the brakes seems to tell it to stop overhead & stay there until you're ready to go. The risers are super tiny which took me some getting used to (just to look at!) but they help me go faster so I like them.


Flying: My first FOUR flights were sled rides (I already whined about the weather in an earlier post) but even from those short flights I could tell the glide was outstanding. When the sun finally broke through yesterday I got a chance to thermal it. I'm sad to say that it did not magically make me a better pilot (damn it!). My boyfriend with years more flying experience still out-flew me. I was hoping I wouldn't have to actually improve my skills and this wing would do it for me, sigh. That being said, I did out-thermal him a couple of times! The wing seems to love it when I turn really tight in the thermal, today I just went screaming up and felt completely stable the whole time. All I had to think about was staying in the core & boom, I was in the cloud mist. Instead of applying big ears right away to avoid the clouds I decided to play with my speed bar. First step I was still going up so went to full bar. Stayed on full bar for 30 seconds or so even though I was flying through transition areas I knew could be rough. My wing felt stable the whole time & never made me want to back off the bar, even with a little pitching.

Acro: It's not really designed to be an acro wing but from videos floating around the internet it seems to do the basics just fine. I haven't tried anything yet besides some spirals. More like spiral entries since I was too low by the time I thought about doing acro to really wind it up but after one 360 I could get the "whoosh" going. Whoosh whoosh.

Landing: I didn't realize how "hot" I used to come in to land on my old wing before until I floated in to my first landing on the Delta. However I did move from a small Addict 2 to a medium Delta so that accounts for some (I was a couple of kilos over the small & right in the middle of the medium). Anyway, setting up my approach is stress-free, lots more time to watch the wind sock from over the LZ as I float around waiting to come down :)

It's a "hybrid" 3 liner, which means 3 lines at the risers & 4 attached to the wing (C's split into D's up top) but in my flying I don't know what difference that makes to me. I've heard concern from coastal pilots who launch in strong winds that they prefer having 4 risers so they can launch with A's & D's, but since I'm a mountain pilot I can't comment on that. There is lots of talk in the manual (& on the wing placard!) not to drag your wing around the ground as it could damage the material, but I think that's just common sense. Most of the new "rules" regarding care of the wing seem to be from more of a liability/warranty place, as if someone tried to complain their wing didn't last after continuously dragging it through rocks or slamming it repeatedly on it's leading edge.

The official glide ratio hasn't come out yet (Thermik magazine is independently testing it & will release results soon) but it's projected to be similar to the M3 which I think is 9.8-1. I believe it.

So there's my techy/non-techy report. Feel free to contact me with more questions and as this week looks sunny I'll be able to get a better feel for it too.

2 thumbs way up on this one!
Posted by Martina at 6:34 AM No comments:

There's a hot new little number in town. It's called the Delta & it's the wing a lot of pilots have been waiting for. It's promising all kinds of technical stuff like increased performance & better glide and the hype surrounding it has gotten people all excited on the world wide paragliding forums.

Almost every day I get someone asking me on Facebook how I like my wing, does it live up to its reputation, have I flown 8 gazillion kilometres on it yet. Almost every day I cry as I look out the window at the weather and think about my new pretty wing sitting all along begging to come out and play.

I think it's time for a road trip. The neighbours aren't too keen with all the burning effigies on my front lawn to the weather gods and it might be a good idea to leave town for a while til things cool down.