Back home with some time to reflect on the past week, and I've found a few answers to my question of why I was not flying with the ability I know I possess.

I wasn't going to talk about it on this blog, but it's been in some media already and around Facebook a bit, so I'll mention it now since it really affected me.  A pilot landed in the river on the 2nd day of the competition and lost his life.  After it happened we had a day off to talk about it and deal with it and frankly I thought I was okay.  From the stories I'd heard (I didn't see the incident) I could justify that he'd had enough warning to get out of the air earlier and avoid the developing weather conditions that led to this awful event.  I told myself that I'd never push that hard to keep flying if it wasn't safe, and through that built enough protection around me that I felt fine to continue on with the competition.

Problem was, the river is between the mountain and the landing fields.  You have to overfly it, and it's right there if you get low after take-off and end up at the lower launch.  I remember looking down at it our first flying day after the accident and feeling a moment of fear and overwhelming sadness thinking about what it must have felt like for him, and quickly began flying around aimlessly, looking for any lift to hang onto to get out of there.  I didn't find anything immediately so flew out much higher than I needed to and held my breath until I got to the (easily reachable from my point) bomb out landing field.

I just remembered that part now.  That was my food poisoning day, so I told everyone I couldn't concentrate (which was true) and convinced myself that's why I flew poorly.  But the next day I did the same thing.  I caught a thermal, climbed up nicely in it, my wing pointed me downrange but my brain wouldn't let me go.  I sabotaged my flying until I had to land in the bomb out again and then went through all those feelings from my previous post, wondering where my confidence had gone.

Funny how the brain can block things out.  I knew there was something else besides low confidence going on and went to talk to Sam.  He's a pro-athlete (X Games, etc) so I figured he knew a thing or 2 about sport psychology.  We had a fantastic talk and he gave me some great questions to ask myself and through talking to him and some other patient pilots (thank you for listening...you know who you are!) I simply said on the morning of the last task, "Maybe I'm more affected by that accident than I thought."  And that was it.

I didn't fly to goal, or even make the first turn point, but I dug into the thermals when my Microvario beeped, and I followed along when my Cayenne 4 said, "hey, let's go!" and I remembered how I got here, why Skywalk and Flyte Park believed in me enough to sponsor me, and more than anything why I love to fly.  I'll admit I was scared, but it was the good kind of fear - the kind that helps you grow - and I bobbed along 10-15 km downrange and landed with a grin at a field nowhere near adjacent to the bomb out. 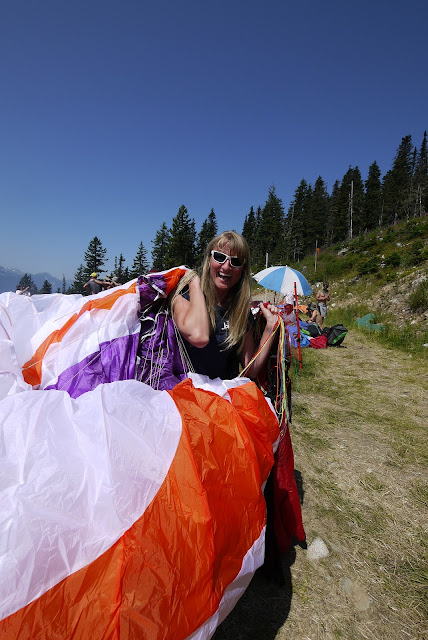 You are one in a million Martina, I really like your introspection! It takes a lot more than a wing to soar ans you definitely have it!